Like the 3D View Master of your youth but updated for the smart-phone generation. The View-Master Virtual Reality viewer will take you around the world and beyond. It is treated as the top Christmas gift for kids. So if you don’t think about what gift you should give your child, you can consider Mattel View Master VR. Then backup the 3D Blu-ray Minions to your iPhone so that your kids can watch 3D Minions with View Master.

Since the movie playback on Mattel View Master VR is based on the smartphone, when you plan to prepare the hot Minions Blu-ray for your kids, you need to convert 3D Blu-ray to 3D MP4 which can be supported by iPhone. This is a easy job. Following the steps below to rip 3D Blu-ray Minions to 3D MP4 for View Master VR on Mac.What you need:3D Blu-ray MinionsA Blu-ray Ripper compatible with Mac El CapitanA Mac If you don’t have a Blu-ray Ripper, you can choose Pavtube BDMagic for Mac, which has the excellent function to rip any commercial 3D Blu-ray movies to 3D MP4/MOV on Mac for viewing on View Master VR via iPhone. See other options. Free download and install:

Other Download:- Pavtube old official address: http://www.pavtube.cn/blu-ray-ripper-mac/- Cnet Download: http://download.cnet.com/Pavtube-BDMagic/3000-7970_4-76177782.htmlSteps to backup 3D Blu-ray Minions to 3D MP41.Launch the Blu-ray Ripper on Mac and load the Blu-ray Minions by “File”. You can choose the subtitle and audio under the chapter list. 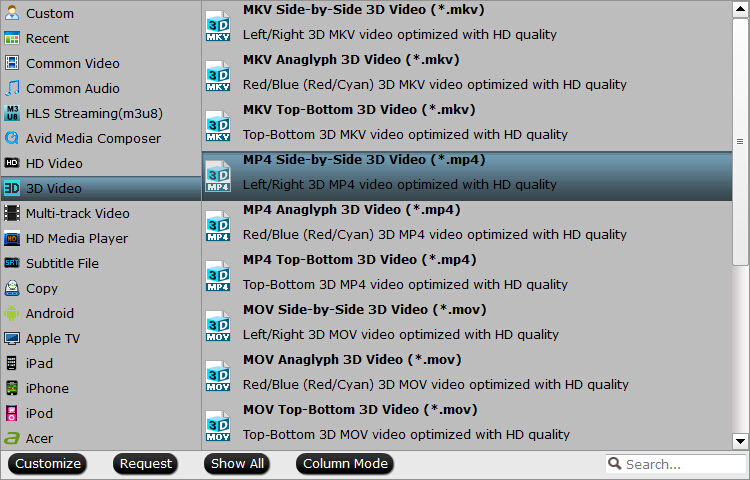 3.Set destination folder and click “Convert” to rip 3D Blu-ray to 3D MP4.Transfer 3D MP4 Minions to iPhone1. Connect your iPhone to Mac with the supplied USB cable, and run iTunes on your Mac.2. Add media files such as videos, movies, music, photos to iTunes library by following “File” “Add File to Library.”3. Select the device iPhone from the device list at the upper right corner of the screen and then choose “Library.”4. Drag the video and music files from the library to the iPhone icon on upper left side bar. And then iTunes will start syncing videos and music to your iPhone.Now, you can connect your iPhone to View Master VR to enjoy 3D Minions. This 3D MP4 movies is also can be used on other 3D Glasses, like Samsung Gear VR, Oculus Rift DK2, VR One, Google Cardboard and 3D TV. Tip 1: View-Master VR is compatible with Apple iPhone 5 and up with iOS 8 or later, as well as select Android smartphones including Samsung, Motorola, LG, HTC and Nexus cell phones.


Tip 2: Click here to get Christmas discount for the Blu-ray Ripper for Mac.